Snabb (Barking) partnered with Krakul to build an IoT controller that connects and moves their automated car park gates. It is a critical piece of hardware that keeps their platform running.

“The solutions offered by Krakul have always been of a high standard. This particular piece of hardware that they developed for us is an enabler for the rest of our business. Without a reliable controller, we could not interface customers nor operate the gates. For that reason, we are thankful to Krakul and continue working with them to develop next-generation devices that are even more capable, cheaper and energy-efficient.”

Snabb is a software business that is automating and digitalising real-world car-centric services such as car parking and washing.

Snabb developed a platform that brings those services online, into one convenient user interface made available on the Snabb App. Launched in 2015, they operate in Estonia, Finland, Germany, Lithuania and Poland.

The team behind Snabb has a vast experience in building software-enabled businesses that have a real-world presence. Their skillset covers all essential roles when concerning business development, software development, and even mechatronics. In fact, the same core team initially played an essential role in founding another startup that has a hardware-infused business model – Bikeep.

That said, when it came to Snabb needing an IoT solution that could move car park gates up and down over the Internet, they came to ask help from Krakul’s team.

Their team includes electronics specialists, however, for maximum efficiency and speed, they ought to bring in an outside partner that has built a variety of IoT systems. Mostly because they believed that they needed a different point of view on the solution to optimise it further.

Also, the focus of Snabb’s team is mostly on sales and software development. In contrast, all hardware-related elements are simply enablers of their business. For that reason, they decided not to onboard more internal team members, and outsource instead.

Build an IoT Controller for Snabb

By the time Snabb came to us, they had already tried to complete the MVP by themselves using prototyping platforms, like Arduino. However, the first installations showed that a more professional solution was needed for reliability and scalability.

That’s when they came to us with quite specific requirements in mind. At that time, their biggest challenge was related to the modem. So we started by discussing and analysing how to place it inside the parking gate barrier.

Meanwhile, we had to keep in mind that the integrated systems had to work well with each other to make the user experience seamless and fast.

That’s where our engineers first suggested that we would build a solution using an off-the-shelf modem. Then, design a simple circuit board next to it that could interface with the car park gate.

As a result of further analysis, we realised the need to find ways to lower the cost of the final product. Mostly the price for the modem we tested was about €150 per modem. After adding the interface board, the overall cost raised to around €200-300. Therefore, a custom-made solution was needed.

So, the next step was to design a custom solution that was more compact – narrower and thinner. During this period, we decided to use a very simple 3G modem. However, we did place more emphasis on ensuring that the product would not contain any safety concerns like overheating and adhere to regulations by using a lot of input and output protection circuits.

The result was already modular enough to fit into different types of parking gate barriers perfectly. In terms of price, our new IoT solution lowered the board’s price by a factor of two, to less than €100 per system.

After designing the custom modem hardware, we still had to work on getting the modem to easily connect with the network. Plus, ensure it interfaces with all of the car park gate barriers used. Completing this and getting the CE certifications for the overall system was completed without any obstacles.

In total, it took about 18 months from our first information exchange to start the final IoT solution production and roll-out. Throughout the project, collecting feedback, drawing constructive conclusions and implementing required changes consumed the most time.

Following the handover, we helped the Snabb team install the IoT devices in various locations by providing technical support for integration. Krakul handled the first manufacturing batches until being taken over by Snabb for greater flexibility.

The most critical detail in production was quality control and testing.

The IoT devices were tested in multiple steps by several parties:

With the first versions, testing revealed that the power supply was not as efficient as it should have been. The chosen voltage regulator topology turned out to be insufficient at high loads and thus did not meet requirements.
As a result, we had to create a new, more powerful version.

When planning a project, we always acknowledge that bugs may appear in the first versions. Therefore, we ensure the necessary buffer time in our schedules. Thus, moving over to a new power topology did not impact the project’s timeline.

In general, we spent about 20% of the project volume on testing due to using rapid prototyping methodology. Meaning, that instead of building a full-scale IoT solution right away, we continually make small iterations and test the versions.

Although this increased the time spent on testing, it also decreased the risk of building an IoT device with a significant flaw that would have ended up being more costly for the client.

As a result of such extensive testing, the batch production was very efficient. We saw minimal problems – just a few component delivery difficulties that got successfully replaced.

Today, we are developing a next-generation IoT device with the client. It will be more capable, cheaper and energy-efficient in its features. Meanwhile, it will permit Snabb to control several pieces of machinery at the same time.

Since finishing the initial solution, we continually worked with the Snabb team. Our aim was to further develop the modem board, so they can use it for their smart car wash business, Wwwash. 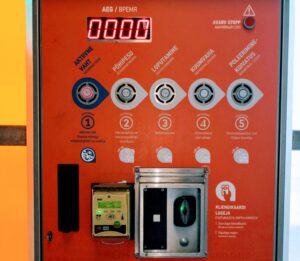